Why Gaga’s Bowie Left Me Empty

Last night, Lady Gaga donned a bright red wig, a hell of a lot of makeup, and partnered with Intel to bring a David Bowie memorial medley to the Grammys.

The only thing seemingly left out of a show complete with forty years of Bowie iconography was Bowie, himself. I don’t mean the physical body. I know the physical body has already moved elsewhere. I mean the soul that is Bowie. The soul that you can feel when you drop the needle onto your Ziggy Stardust vinyl and that first guitar strum fills the room.

People may have loved the spectacle that was Bowie, but what they connected to was the soul. That’s why artists like Bowie and Madonna have careers that span decades and countless personal reinventions. We may have gravitated towards Madonna for the pointed bra, towards Bowie for the makeup and glitter, but that’s not what kept us around. The songs are what held us. The songs are what sustained us.

This is why an artist like Bowie can stop touring but never stops being relevant. Because the music is always alive. The music is always there. This is why so many Madonna fans ignore her current spectacles and scandals. They’re in it for the music. For the swelling crescendo of “Live to Tell,” its aching melody, the pointed vulnerability of the lyrics. Madonna may know how to entertain, but she also knows how to perform, how to reveal, and how to connect. Madonna’s iconography may have given her resonance, it may have given her an MTV-based platform, but when she’s gone, it’s the music that will remain. That’s why her desperate confusion of sex appeal with relevance can feel so frustrating for those of us who know her best. We’re in it for the music, not the pointed bra. She does not have to be sexy to be relevant. There are many sexy poptarts, but how many bare their soul with such pop perfection as “Till Death Do Us Part”?

And this is what Gaga got so wrong. To condense a man’s lifework into six minutes is not an homage. It’s a clickbait soundbyte. It’s a superficial read. It’s a surface skim that fails to grasp onto what really matters–the songs. And, in particular, the soul behind the songs.

Because while Gaga is so busy trying to succeed, she’s forgetting what it means to truly perform. Other than the briefest of hints at the very beginning of her performance, there was no emotion there, no vulnerability, no ache, nothing of the kind that makes Bowie’s delivery grab you by the heart and not let go.

I’ll never forget the first time I heard “Space Oddity,” and I didn’t need Intel to capture the moment. I lay in a dark room, letting the record spin in circles, the music filling the void inside me.

If Gaga really wanted to pay tribute to Bowie, all she needed was a dark stage and his music. Bowie could handle the rest. 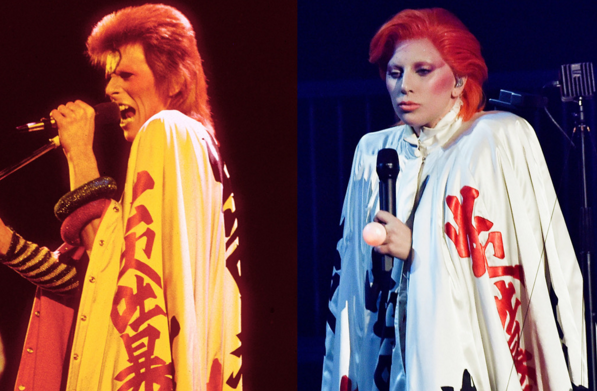